Niklas Nikolaidis from Joinville runs a European network for ethnic marketing with more than 40 million unique visitors. Expat Marketing asked him how companies can target migrants online, and how the industry has evolved in the last decade.

In the US, ethnic marketing has been a major marketing topic for years. In Europe, only few companies run ethnic campaigns. How come?

That’s a very good question. In the US, there are big homogeneous ethnic markets like the Latin Americans with significant spending potential, and companies have noticed this. For example, migrants make up on third of of the market for fixed telephony, or an estimated 86 billion US dollars.

In Europe, there are 42 million migrants, but the market is fractured, with migrants of many nationalities in a lot of different countries. Many companies simply do not know how to target this group, and if they do, they tend to use local offline media rather than online.

The digital divide between migrants and the local population is a myth. Research shows that ethnic communities are very much online, sometimes more than the local population. They use the internet to stay in touch with their family at home, for example. 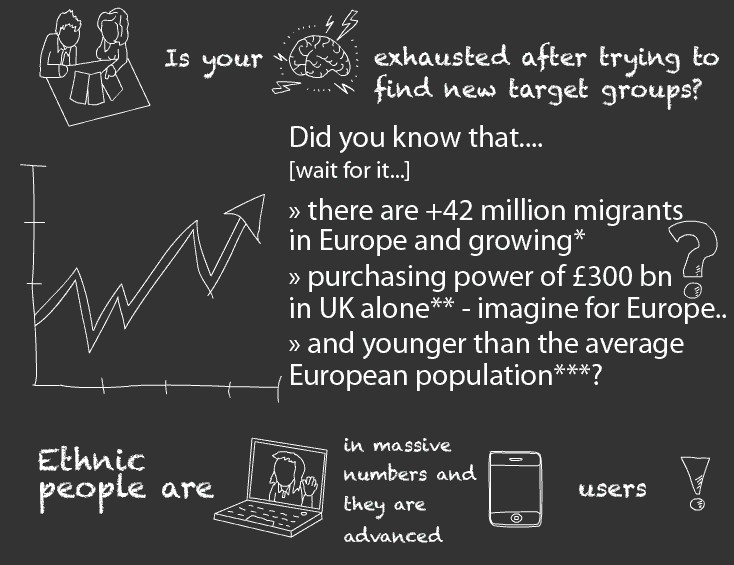 Which ethnic markets are the most important for you?

Our most popular customer groups are Polish, Arabic, Spanish and Turkish, in that order. Of course, you can then break this down into more specific groups.

How do you target these groups?

You can go as advanced on the targeting as you like. We get data from partner sites, and we also use technical parameters such as browser language, geo-location and others. With the surge of social networks, we can also target by demographic data like age, gender and the like.

Which social networks do you use to target migrants?

Facebook is by far the most important network, but for targeting migrants you should consider other networks as well.

Take Friendster, for example. In the Western Hemisphere this network is almost dead, but it’s extremely popular among Filipinos. Hi5 is very popular among Africans, and Sonico is an important network for Latinos.

We also use a variety of ethnic dating sites. In some countries, you also have specific ethnic social networks, for example for the Polish in the UK. Unfortunately, most of these these are usually local only, so they don’t generate enough reach on their own.

What are your main customer groups?

Mostly companies with specific products for migrants, such as calling card providers or international money transfer services like Western Union. We also see increasing demand from airlines, telco companies and some consumer product providers starting to provide special ethnic product lines, like Nestlé with their Halal products for Muslims.

You started your career at Western Union. However, we haven’t seen them much online.

That’s good, because you’re probably not part of the target groups (laughs). But your are right. For a long time, Western Union and Moneygram had neglected the Internet, leaving room for others. They got the bill for that: Paypal has taken over a lot of their market.

Western Union has finally realized they need to do something online. Moneygram is still not very active online.

What’s your advice for companies looking to target migrants?

Don’t think too much, just try. You can start a campaign on a very limited budget and simply test if it makes sense.

A ‘limited’ budget is relative. Let’s say I’m a restaurant in Stockholm looking for foreigners. Would you be able to start something for 1000 Euros?

(Hesitates) That depends on your market. In a case like this, we might simply recommend you to go to Google.

Google mostly works on a CPC base. Which booking terms do you offer?

When we started we wanted to build a pure affiliate network. But surprisingly, most of our customers prefer to book on a CPM or a CPC base, so this is how we work today.

Many people still consider migrants as ‘cheap’ target group. Which CPMs do you see in ethnic marketing?

It really depends on the target group and the media. On some networks, CPMs can start as low as 10 cents. On other, they can go up to 20 Euro.

A final question out of curiosity: compared to other European markets, there are only a very small number of foreigners living in Sweden. Nevertheless, you started your company in Stockholm, and Stockholm is also home of some expat sites like The Local. Is this pure coincidence?

I know it sounds cynical, but this is partially due to the right-wing party in Sweden. With their rise, migrants received more attention in national politics. And all the sudden many companies realized: ‘Hey, there is a market here!’

Niklas Nikolaidis had worked for EF Education, Western Union, CMC Markets and other companies before he founded Joinville in 2008. He speaks four European languages, has lived in various countries and has worked with ethnic markets for more than 10 years.