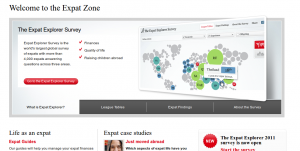 HSBC’s annual Expat Explorer Survey may well be the most famous of all expat campaigns. It was launched in 2008 and has since grown into the world’s largest survey of expats. In 2010 there were over 4,000 respondents in 100 countries around the globe.

When HSBC announced the opening of its 2011 survey, Smart Insights‘ Dave Chaffey posted an insightful interview with Lisa Wood, Head of Marketing at HSBC Bank International.

The survey was devised because as a business we wanted to better understand the expat community and the issues and challenges they face whilst living or relocating overseas. Expat Explorer has provided us with some fascinating insights and because it covers all aspects of expat life has allowed us to better tailor the services we offer to our existing and potential customer base.

Chaffey’s interview touched on a numbers of key points:

HSBC’s Expat Explorer is a model expat campaign in that it makes use of new media, builds both brand recognition and credibility and drives web traffic, all at a relatively fixed cost. The up-front investment in conducting the survey is therefore returned many times over each year in terms of media coverage and overall visibility. 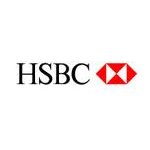 HSBC Holdings PLC is a provider of banking and financial services worldwide. Founded in England in 1865, it now operates over 7,500 offices in 87 countries and territories worldwide. Its offshore and international banking services are popular with expats of all nationalities, and the bank’s annual Expat Explorer Survey is the largest in the world. Nonetheless, consensus estimates among Bloomberg analysts show HSBC’s earnings falling off sharply in in 2011 and 2012. http://www.hsbc.com

Got it! Thanks a lot again for helinpg me out!