A few decades ago, the massive majority of countries had a pretty limited amount of non-nationals resident. Out of those, many were long-term residents, so for the purposes of marketing were ‘assimilated’ and homogenous with the rest of the population. With the exception of very specific products, such as long-distance calling or flights, foreign residents were treated the same by marketeers; sliced and diced by age, gender, income, interests and other very standard demographics. This is no longer a wise strategy. Why?

Today, we have entered a period of hyper-mobility, especially in Europe. The EU’s Erasmus programme started in 1987 with 3,244 students going between 11 countries. In 2011-12, more than 250,000 students plus more than 46,000 staff took part in exchanges between 33 countries. Studies show that many of these students, in addition to many other young professionals, are then country-hopping in search of interesting opportunities and new experiences. When you add in legal immigration from the rest-of-the-world based on visa schemes and people living and working without official leave to stay, the numbers grow. There is also the more recent phenomenon of investor-based visas: €143k ‘invested’ will get you residency in Latvia, €300k for Cyprus and more countries are jumping on the bandwagon. These are popular with oligarchs and rich residents of unstable or repressive places – it has been reported over 1,000 Chinese nationals got Schengen residence permits in the last year through the Cyprus scheme. The rest of the world is also a very mobile place as there is a strong trend towards increased personal mobility, especially among the under-45s.

Why does this matter?

It turns out that it’s very easy to make a mistake when evaluating the relative importance of market segments. Even if foreigners are a relatively small percentage of the total population – it does not mean they represent the same percentage of the new customers available to get in the next 12 months.

The following graphs are adapted from a market study we conducted for a major national telco company.

If you are the ‘blue guy’, you’re probably feeling pretty happy. Until you see this… 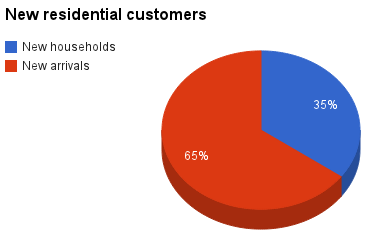 And then you think about your marketing splits. 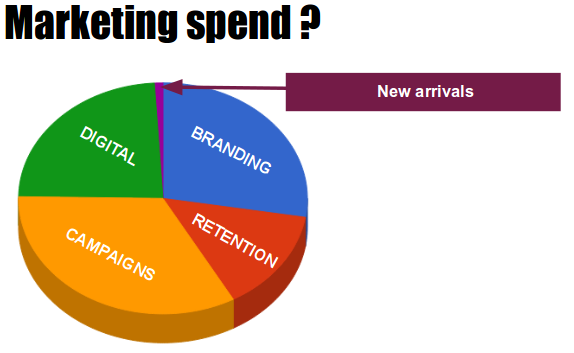 ‘Bananas’ is an old-fashioned expression in English to label something as ‘mad’, ‘insane’ or just plain stupid.

A ‘Banana Split‘ is just a dessert.

Does your marketing look like either of these today?